You probably know the Russian company Caviar that makes the customized golden phone. The luxury brand decided to go even further and announced a new design for the Samsung Galaxy Fold. It is dedicated to the Game of Thrones TV series and the unreleased novel The Winds of Winter and goes overboard with the ornaments as is the norm with Caviar. Under the hood, the manufacturer covers the Galaxy Fold outer panels with golden elements.

Also, those features refer to the story of the famous “A Song of Ice and Fire” saga. Notably, this story turned into the HBO series that finally ended last week. Caviar says it will issue seven units (after the seven houses) with the unique design and are already available for pre-order. Of course, Game of Thrones is not everyone’s cup of tea. Therefore, Caviar offers another two simplistic models of the Galaxy Fold with carbon, leather and, of course, more gold. 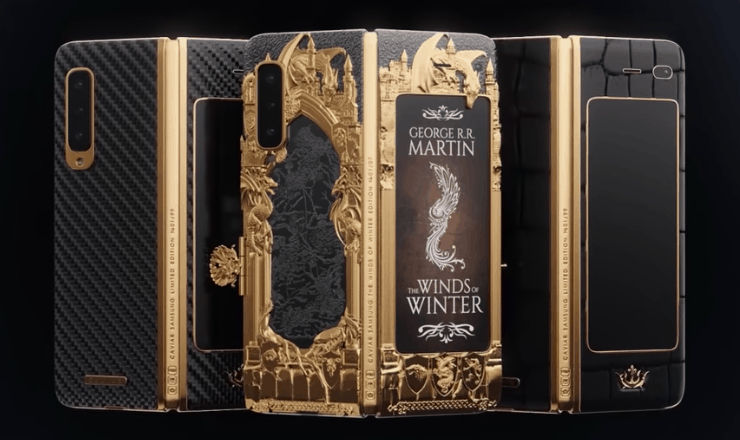 There is no precise information about the launch of Caviar editions. However, we expect to see those phones in the upcoming months. As for the cost, the Caviar Samsung Galaxy Fold price starts at RUB 499,000 in Russia, which is approximate $7,700, for the Game of Thrones Edition. Moreover, Caviar offers it for the global audience with an even higher price tag – $8,180. What do you think about this luxury design? Share with us your idea below!